It's Friday night, and that means our tower has just a few hours left before it comes out of reinforced.  I have contracted with Noir to come in and smash my enemies.  But I am not very hopeful this will actually work, because to get Noir in requires the enemy to make a mistake.

I log on about 9:00 to get my guys on and watching.  A quick check reveals there to be six sigs in the system.  I expected five: three gas sites, a data site, and our static.  Is there a new gas site?  Maybe a wormhole?  Time to scan.

I don't see anyone on dscan, but that does not mean anything.  I expect they have a cloaky who can see the tower, either with eyes on, or at least via dscan.  And similarly they will have a guy on who can see and hear the static wormhole.  But they may not have a guy who can see our outer planet.  I warp out there to a safespot to deploy probes.  I see nothing on dscan there, either.  I get my probes out and throw them out of the system.

It is possible that a site has despawned, so I order a warp to each one (and then immediately cancel) in order to check to see if it still exists.  (This works because you get the site's popup immediately upon ordering a warp.)  All four sites still exist.  Now I try to pick them out from the overlapping spheres.  I can remove two, but the others are too overlapped.  Time to scan.

If I had a fleet on standby in highsec, I might be able to get it in.  However, I don't.  Noir is not going to stand to until 3:00 AM.  But I can still exit to highsec, and put bookmarks in the nearest station.  I doubt that the enemy will fail to close this wormhole.  Still, maybe they will make an inexplicable blunder.  I get Otto, my second-account alt, to watch the K162 in his Cheetah.  I will want to know immediately if the enemy starts crashing the wormhole.  Then I exit to C2a.

The system has five sigs.  I scan them down fully, in case there is more than one useful wormhole.  In fact there is a second highsec, but it is EOL.  I don't explore it since it will be gone by the time I would need it.  I find the static wormhole last, and exit into a system in Amarr highsec.  I bookmark the one station, then fly to it and copy my bookmarks, and place them there.  Now I can contract them to Noir in the event that the connection is still open in five hours.  Grasping at straws.

I dscan back in my system.  Still no probes.  I want to dump off my load of stuff from my Tengu.  (In particular, my corpse collection, which unlike everything else I have cannot be replaced.)  I'd prefer to leave this stuff at Amarr, and not this station in the middle of nowhere.  Also I want to buy some nanite paste in case I need to overheat stuff again.  It is six jumps to Amarr.  I decide to risk the trip, and set out.  I make it to Amarr and still have not seen probes.  So I dump my stuff, and buy nanite paste.  Then I diddle around with my fit for a bit, trying to decide which stuff to leave.  Do I need my mobile depot and parts to refit into ghostbusting mode?  No.

I am still waffling on what to carry when my scout sees probes in my system.  OK, my pleasant interlude of fit-crafting is up.  Back to virtual reality.  I depart Amarr and start burning across highsec to the entrance.  The probes get close.  Then they vanish.  Meanwhile, I have gotten to the entrance, and entered C2a in my Tengu.  As I do this, my alt sees an enemy scout cross into C2a.  That's not good.  I warp the Tengu to the wormhole at 20km in time to see the scout decloak and move off.  He does not warp.  Of course he might warp any time after cloaking.  I start watching in C2a for the scout's probes.  If he scans the system down, they may plan to leave it around to get their own guys in.  If he does not scan, then they will certainly pop it. 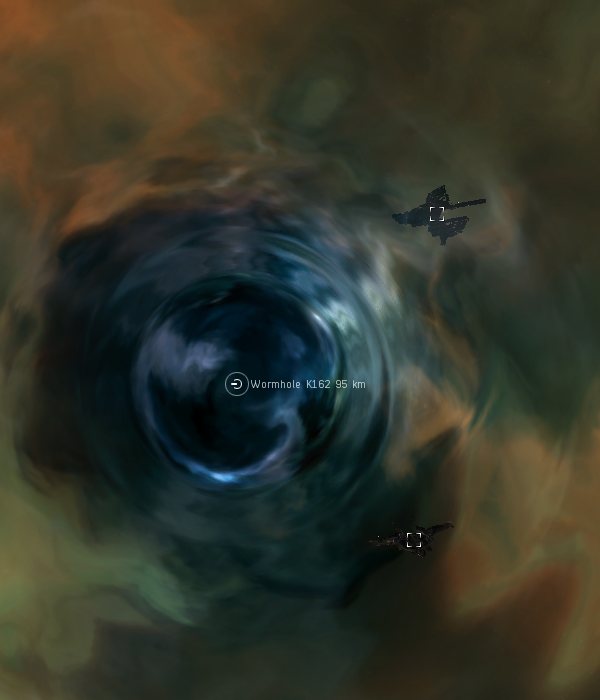 No probes.  But I see ships on scan in my system.  A Vargur, and Onyx, and a battleship.  They appear on grid, and the two big ships cross and return.  They are stressing the wormhole.  They warp off after their pass, and I take the opportunity to come in unmolested.  Of course they will have seen it.  But there's nothing I can do about that.  I warp off to a safespot.  My alt watches as their scout return, and they collapse the wormhole, finally using the Onyx for the last bit.

Nothing to do now but wait.  I think about putting my scout at the static wormhole, but I have had some stability problems after Rubicon 1.3, and decide this is a bad idea.  It's not like I will be watching anyway.  I will be reading a book and then trying to get some sleep.  So I warp him to a safespot.

Now I need to try to sleep.

Later.  Much later.  I set my alarm for 1:45 AM.  I did get about an hour of sleep, which is something but not enough.  I get up and get on the computer.  Hiljah has logged on, but is not around right now.  That's good.  I check the situation.  The wormhole to C4b is at half mass, which is not good.  But it should still be usable if I can scan out.  Nobody is currently there.  I watch.  I could send Von out and start scanning now, but Alekseyev said start an hour before, so that I will do.  I don't see a lot of hope here, but I still have a little.  Perhaps the enemy will be lax in observing the wormhole, wanting to leave it open to get in their guys.  Then I might be able to bring in Noir.

In a few minutes, this notion starts to fade.  Someone comes in: them.  The enemy Onyx warps in.  I see several ships show up and cloak.  Not good.  Obviously they grasp the importance of this location, and they are online.  They swap some goods.  Then they all cloak or warp off.  The wormhole looks clear, but it is not.

Hiljah says something in chat, and we get on coms. More enemies enter from the wormhole, one here, another there.   Eventually it is getting close to 2:45, which is when I am going to try to get out regardless of how obvious it is.  Hiljah logs on an alt at the tower.  Perhaps because of this, some of the enemy uncloak and warp off of the wormhole.  I decide to go for it.

I cross the wormhole.  On the other side is an interceptor.  I attempt to warp, and it locks me as I initiate warp to a random customs office.  I hear the wormhole noise: they are coming to support.  I start locking back the interceptor, figuring that I may need to damage him to get him off me.  Then, zoom -- I warp.  Evidently my warp core stabilization was sufficient.  I cloak up as soon as the lock is broken.  I'll give the pilot credit: I warped to a customs office (at 70km), and there he is behind me.  He saw where I went and gave it a try.  I warp off cloaked to a second celestial.  That'll lose him.

Now I fire probes and start scanning the system.  I am glad to see that it has a C3 static.  However, as I search more and more ships mass in my system at the wormhole.  I find the C3; there are no other wormholes.  Should I go into C3a?  I warp over to the wormhole to look at it.  There's a Legion there.  They will certainly know if I cross it.

I can see that I have a losing position.  They probably have enough ships to collapse the wormhole in one go.  If I go into C3 and continue scanning, they can collapse the wormhole and I probably won't even have the time to get back in.  And even if I do, they have an impressive fleet sitting at the wormhole.  This will undoubtedly include the interceptor I have seen.  I may be able to get through, but I probably will get killed and podded out.

But on the other hand, if I remain in C4b doing nothing, I am absolutely guaranteed not to get in Noir.  So I must try, even though the chance is nearly zero.  I bolt past the Legion and jump into C3a.  It follows, but I easily cloak, and then get into warp, before it can do anything.

I barely have time to get out probes and they start collapsing the wormhole.   My alt sees the entrance of the various ships that have been looking for me in C4b.  Most of them take up positions orbiting the wormhole.  Quite a gauntlet to run!
I am out of hope and at this point, unwilling to play out the likely loss of my Tengu for practically nothing.  Even if I do get back in, I see no hope of scanning out of the next incarnation of my static.  I will face the exact same problem, except that now I know for certain that they have a full fleet here to keep tabs on the wormhole.

They collapse the wormhole, and I am still sitting in C3a.  Gone, out of the fight, and out of fight.  I am in a chat with Alekseyev, and I regretfully tell him to stand down.  I can't get an entrance.  TNC has proper hole control.

Endgame.  Checkmate.  I log off Von in disgust.  I'll get him out to highsec some other day.

Well, at least I can get some sleep tonight.  But not yet. There is yet work to do.
Posted by Von Keigai at 10:41 AM

Labels: PVP, Things I do in EVE, Wspace