I promise not to bother you -- much -- with stupid politics.  But hey, stupid politics bothered me first.  He started it!  Sometimes I write about stuff that other EVE bloggers are writing about, because I read them and react.  And are they ever!  Here's a link-dump of stuff that I thought was good writing:

I. My Initial Take on the Election

I refer you to my CSM 9 voting recommendations article.  What were my goals with respect to this election?


I want to discourage you from voting.  ...  Voting when you know nothing should be seen as a shameful act, not praiseworthy.

Turnout was way down.  I like to think my discouragement helped.  Victory!

And what about for people who did vote?


What are my criteria for candidates?  Well, first of all I feel that all areas of the game should be represented on CSM.  Of them, I feel nullsec is overrepresented while lowsec and highsec are not enough.  Veterans are represented by the nature of the thing, and newbs hardly at all.  Beyond that, I care about whether the CSMs will work.  ... I don't really care as much what their specific "policy" opinions are...

Who got elected?  Most of my slate, in particular the people I selected as hard working, and those representing lowsec and newbs.  Victory!

Finally, what about the specific reason I voted?


Sugar Kyle - this candidate is the reason why I am bothering to vote.  It comes down to this: I like her.

Sugar finished third, surprising many commentators and pleasing most.  Victory!

Most other people I read think that the CSM9 results were poor.  This is strange, because for the most part they also seem to think a lot of good people got elected.  (I.e. everyone lauds the election of Sugar; Sugar is not an acquired taste it seems.)  The handwringing is really about three things: that nullsec and in particular the Goons are over represented; that wormholes are under represented; and that turnout was low.

Why is turnout not a big deal?  Because the CSM is an advisory body, not a legislative body.  According to the modern political formula of "will of the people", a legislative body draws its power from the people; "Governments... deriv[e] their just powers from the consent of the governed".  Consent is manufactured in many ways, but ratified by votes.  If the people do not vote for it, the legitimacy of the legislature is questionable.  Therefore, it is certainly in the interests of politicians, and arguably in the interests of the larger society, to have as many people vote as possible.  Note the inherent contradiction here, between maximizing turnout and maximizing the quality of the legislative body.  It's easier to get lots of people to vote for you if you never say anything controversial.  It's also easier to get credulous idiots to vote for you than skeptical geniuses.

By contrast, an advisory body has no power of its own; its power (if it has any) lies in giving good advice to some powerful patron.  As such, it does not matter how many or how few people voted for any particular adviser.  What matters is only: is the advice helpful to the patron?

This is why I was serious when advising people who know nothing to not vote.  Your consent to CSM is neither needed nor helpful.  The only vote that matters to CCP is your subscription.  Whereas your ignorance might reduce the quality of the CSM, by electing a useless representative over a useful one.

Now, why is bloc voting not a big problem?  Again, because the CSM is an advisory body.  An advisory body exists to give advice (duh); to do that it needs a work ethic, and it needs smart people.  That is why I emphasized those things.  It also needs expertise in what it is advising about; this is the reason to want representation from various areas of the game.  Beyond that, though, all the candidates are quite familiar with many aspects of EVE.  So blocs are not a significant problem.  And while I don't feel that the representation level is perfect, it's quite good enough.

Consider what happens in a legislative body when a party is overrepresented.  It starts making rules to favor itself.  I.e. if CSM had legislative power, perhaps the Goons could lead the nullsec blog to vote in "nerf highsec into the ground".  And CCP would have to do it.  The key thing here is that votes in a legislative body are power.  If  51% vote for a policy, good or bad, it is enacted.  Therefore, the voter needs to worry about who has or might obtain that 51%.

By contrast, in an advisory body popularity does not automatically translate into power.  The nullsec representatives can push whatever they want.  But CCP can easily take their bias into account.  They know who the nullsec guys are.

What this really gets back to is that this is CCP's game, and CCP -- for all their weirdness -- are still a pretty good sovereign.  Hopefully, the CSM can improve CCP's governance, but they are not the government.

There's one more thing to say with regard to null representation and wspace underrepresentation in CSM9.  And that is that wspace is not broken in any truly deep and/or complicated ways, whereas nullsec is.  In nullsec, as I wrote at Jester's:


The problem is the blue donut, which is an inevitable result of capitals trumping everything else and easy force (i.e. capital) projection.

(Yeah, that's three different problems in a single sentence.)  To which I might add one more huge problem: blobbing and time dilation.  Nullsec is, or should be, the end-metagame of EVE for the biggest groups.  The wars out there should be a source of wonder, and inspiration; every player should want to get out there and fight -- at least a little bit.  Currently, I don't.

There's a lot one can say about null's malaise, and indeed I have ideas on how CCP might address it, some published, some not.  But whatever the solution(s) might be, it is a huge problem.  And CCP is going to be working on it soon, if Jester is to be believed.  (See here; key diagram below.) 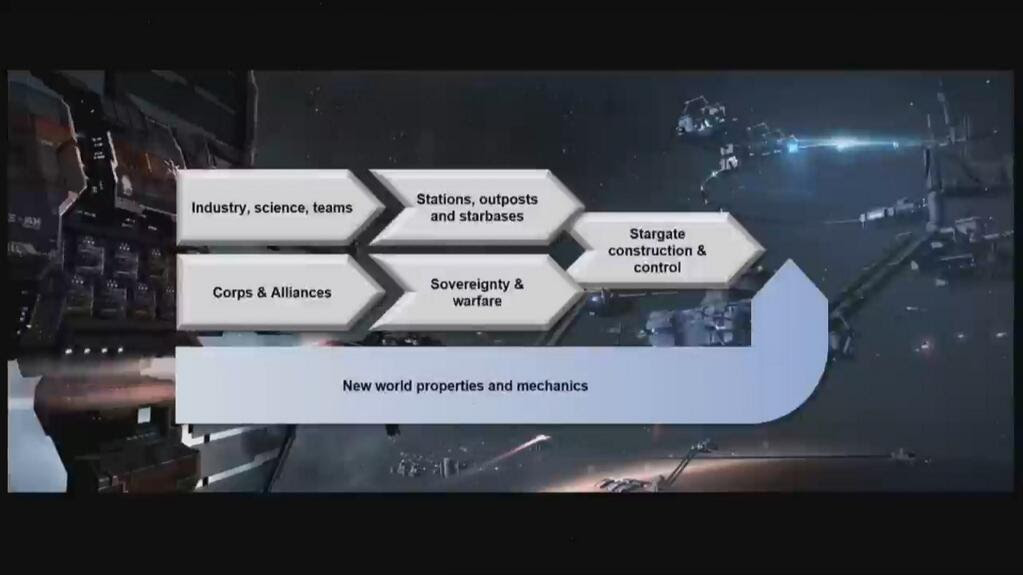 The problem here is large in terms of in its scope, in terms of what changes would be needed to fix it, and in terms of getting nullseccers to accept those changes.  It is large in terms of EVE's and thus CCP's profitability.  For all of these reasons, I think it is good that CSM9 has a lot of nullies involved.  You or I can have all the good ideas in the world, and CCP will probably never know about them.  But rest assured that if mynnna has a way to fix null, he will be heard.  Even though his name is annoying.

By contrast, there are no fundamental problems with wspace as it is.  POSes and corp roles are deeply annoying, but they do not threaten to remove the reason for PVP in wspace.  Similarly, the horrible z-arrow probe movement is a blight on the user interface of EVE, but its existence does not make wspace hunting unfun.

I think overrepresented null may be just what we need for this particular CSM.  Victory! -- arguably.

IV. My Recommendations to CCP

As if they need them or listen to me!  Hah.  But here they are:

The system is working.  We have a perfectly adequate CSM, and perhaps even an excellent one.  So huzzah for us all!  You don't really need to change anything.

But you can do better still.  As I commented at Stabbed Up, contrary to the conventional idea that CCP needs to "get out the vote", you really should be working to suppress the vote, in the interests of weeding out dilettantes and greedy bloc voters, and thereby getting a superior advisory body.  You should institute a steep voting tax. I would say a PLEX is too much, but perhaps 200m ISK. This would cut the voting numbers down to perhaps a tenth as many, with much higher quality.